galaSAT ONE has been our first flight with the goal of testing both electronic equipment and necessary logistics. After two previous cancelled flights, last 23th October galaSAT ONE reached the bursting point (27602 meters) at 13:16 pm, while we are driving toward the landing site. 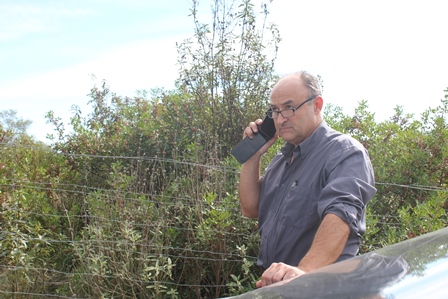 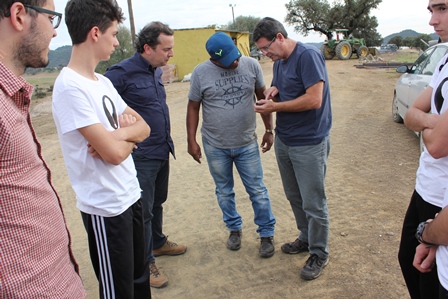 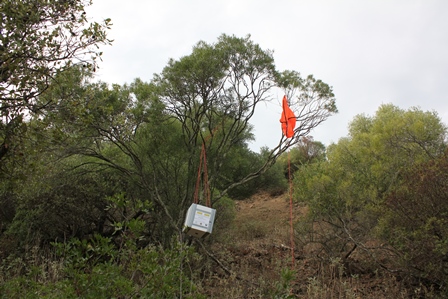 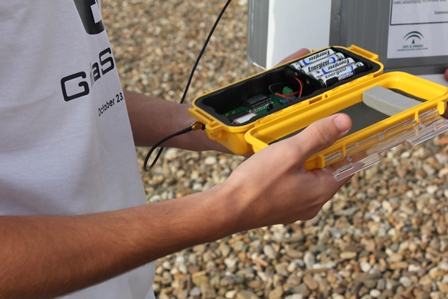 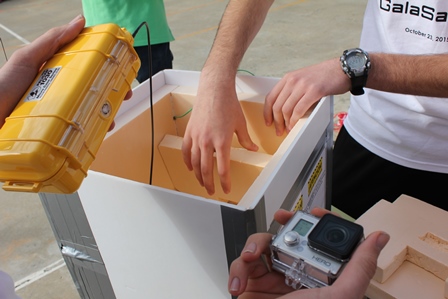 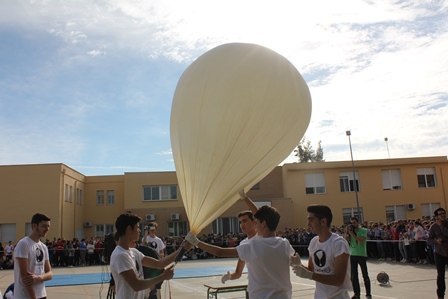 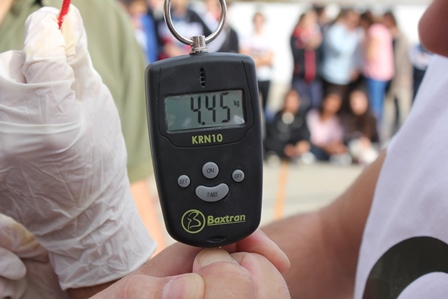 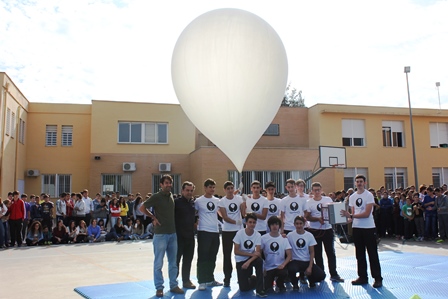 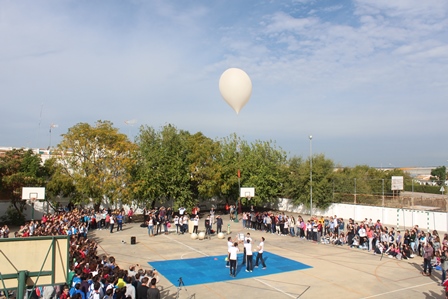 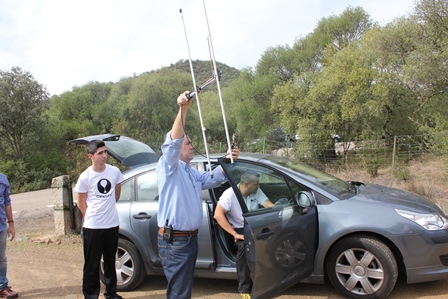 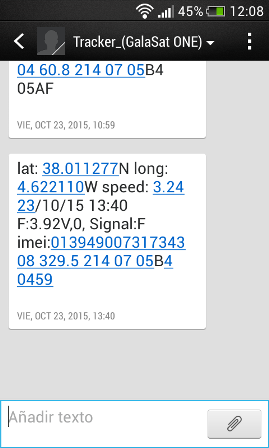 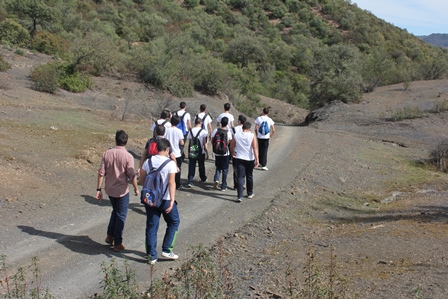 Walking toward the landing point
15 / 15 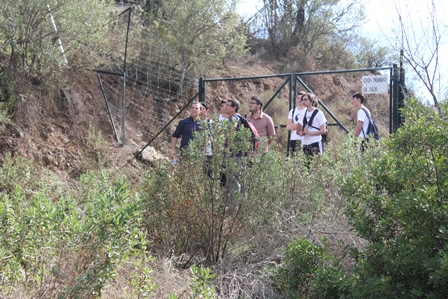 Distance: 67 km from the launching site (in straight line)

The afternoon before galaSAT ONE was launched we were:

We assembled at 9:30h (am) for our final meeting in order to do the last flight prediction and move the equipment to the launching spot (playground) Guillermo started to film the whole process and Paco started to take uncountable photos.

While a part of the team was preparing the launching site, the APRS tracker was being tested by Alvaro Martínez y Francisco at the flat roof. They confirmed a good APRS communication with the balloon (GPS coordinates were being sent correctly)

Alvaro Gonzalez, Rafa Duran y David started filling the balloon at 11:15h (am). After about 15 minutes the balloon was almost filled . At the beginning, there was a dangerous moment because of a sudden gust of wind, but everything worked properly. The neck lift (4.45 Kg) was measured at 11:39h (am) At the same time, Victor y Sergio were preparing all electronic devices inside the payload. Around 11:42h (am) everything was done from the checklist.

We immediately started tidying up and about 10 minutes after the launch we were set to go after the balloon. While we were packing someone announced good readings through the APRS tracker.

We started travelling in the direction of the predicted landing site. Around 13:16h the information from APRS system indicated that the payload was falling. Ten minutes later, we stopped our cars at the intersection of N-IV and CO-3103 and we made a shocking discovery. The GPS information had stopped. The APRS tracking system was shut down, we had no GPS information. We were completely blind!

We started questioning everything. What did we did wrong? What would possible happen to shutdown the GPS information of APRS? Maybe something was destroyed? Either way we continued on our path to the landing site. At 13:40h we made a stop to check if we would get some sort of aprs communication. Nothing. However, after calling to the secondary tracker system (TK102-2) we got a SMS with GPS information. Some minutes later, when we were driving to the landing site we received information from APRS system. The payload is in same area! It is not moving, landed there!

Our difficulties had not finished. To arrive there we needed to get permission from the owners of two hunting farms (Mr. Ignacio Cotillo and Mr. Antonio Ortiz) At 14:53h we started walking toward the landing site because we could not use our cars. Three kilometers later we found a closed gate so we had to go back to the beginning point and call the owners again.

While the young members of team were recharging batteries, our URC friends were getting GPS information from the APRS system. The payload is not moving. One hour later the person in charge of these hunting farms, Mr. Reinaldo, allowed us to access to an area close to the landing point by car. After walking for half an hour, through countryside, we found at 17:33h the payload intact hanging from a wild olive tree. Amazing! We were so happy! We had recaptured all the equipment, parachute, box, cameras, sd card and balloon remains.

After checking the camera’s SD card we could see amazing images but a little foggy. Fortunately, we got the whole launch filmed. Apart from that, we checked the SD card for sensor data.

We also had awesome pictures and movies of this amazing day thanks to Guille, Paco Lopera, Paco Mohedano, Paco Ballesteros, Aníbal de la Torre and Jose Miguel Santos. Go check it out in this website’s gallery section.

We didn’t know why the APRS tracking system shut down around 4000 meters above sea level, but fortunately the equipment woke up when the payload was at the landing point.

In conclusión, we got a successful and also arduous launch. It was our first, we learned a lot and had some points to improve. It was also an interesting trip, an amazing experience to enjoy with all members of our team and URC friends.

The graphics below show the obtained results. This data was collected by two dataloggers and the APRS tracker during the whole flight.

The internal temperature shows that the DHT22 sensor was located closed to electronic devices which were emitting heat energy because of batteries. Apart from that, these results show a proper isolation of the payload box. It reached a minimum of about +18ºC

According to GPS information from APRS tracker we can analyze the height evolution. The high altitude balloon reached a maximum height of 27602 meters at 13:16 h. As you can see in the height graphic, around 4200 meters the APRS tracking system shut down. At 13:56 h the signal from the APRS tracker showed that payload had already landed.

Predicting the balloon’s flight path is a requirement in Spain and the results must be provided to the National Aviation Authority (ENAIRE) before launching. Fortunately, there exist many easy-to-use online calculators that can estimate our path. The most popular online flight prediction tools are the Cambridge University Spaceflight Landing Predictor (CUSF) and the ASTRA High Altitude Balloon Flight Planner.

Thanks to information from APRS tracker we can compare and validate the predicted flight models vs the real flight. As you can see in the images below, CSUF predictor has been more accurate than ASTRA predictor. The straight line distance from CSUF Landing point to Real Landing Point was 3.33 Kilometers. However, the predicted flight model by ASTRA shows an enormous distance (17.38 Kilometers) 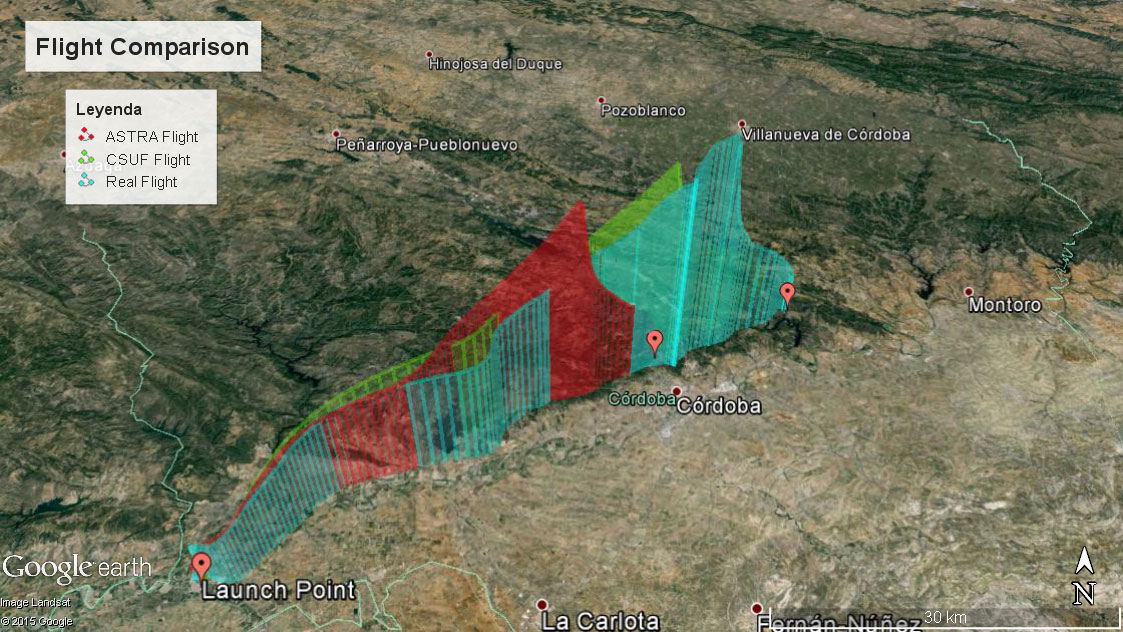 View from the South

View from the North

View from the Top